Something about the address mentioned in the news caught my attention: 3430 N. Academy Blvd., just south of North Carefree Circle.

Although I hadn’t lived in Colorado Springs in decades, I recognized the area as my territory for a while.

It’s one thing when a mass shooting that seems commonplace in this United States takes place in an unfamiliar city or town. But the mass shooting of at least five people and the wounding of 17 at the weekend’s LGBTQ nightclub in a state and city I once called home really hit me.

“This year will end up being the worst year for mass shootings in the last decade, with at least 13,” according to The Colorado Sun. “Of the 61 mass shootings since 2013, more than half – 36 – have occurred in the past three years.”

That number doesn’t include the 2012 massacre of 12 and wounding 70 at an Aurora movie theater. It also doesn’t include the 1999 slaughter of 12 students and a teacher at Columbine High School near Littleton, in which about two dozen others were injured.

I’ll leave the subject of Colorado and gun violence for another day. And we’re still hearing more about the Club Q killings, officially charged as a hate crime on Tuesday.

But I want to talk about hate crimes — something Hawaii witnessed just last week when a jury found two native Hawaiians guilty of beating a white man on Maui in 2014 — as well as reports that there are organized hate groups in Hawaii.

What is a hate crime?

The Southern Poverty Law Center reports that the US Congress passed the first federal hate crime law in 1968. Before that time, “local law enforcement refused to investigate or prosecute lynchings and other racist crimes,” particularly in the South.

According to the SPLC, “This narrow statute made it a federal crime to violently harm, intimidate, or disrupt anyone because of their race, color, religion, or national origin if they attempted to participate in any of six federally protected activities, including voting or attending school.” “

US hate crime laws have since been amended, including the passage of the Hate Crime Statistics Act in 1990. It requires the US Attorney General to publish an annual report on crimes with evidence of prejudice based on race, religion, sexual orientation, or ethnicity .

In 2010, Congress passed the Matthew Shepard and James Byrd Jr. Hate Crimes Prevention Act. Shepard was a gay college student who was beaten and murdered in Wyoming. Byrd was a black man in Texas who was dragged to death behind a truck by white supremacists.

Among other things, the 2010 law removed the requirement that a hate crime victim must have participated in a federally protected activity, such as voting.

Today, a hate crime is defined by the FBI as a violent or property crime — murder, arson, assault, vandalism — motivated in whole or in part by an offender’s bias against any race, religion, disability, sexual orientation, or ethnicity, gender, or gender identity.”

In 2020, the FBI documented 8,263 hate crimes nationwide, reported by more than 15,000 law enforcement agencies. But SPLC says it “vastly underestimates the magnitude of the problem,” in part because it’s voluntary and because many victims never report what happened to them.

Meanwhile, nearly 250,000 hate crimes occurred each year between 2005 and 2019, according to national surveys by the Justice Department’s Bureau of Justice Statistics, according to its annual National Crime Victimization Survey, which surveys approximately 95,000 households.

In addition to federal laws, 46 states and the District of Columbia have hate crime statutes, although they differ.

Hawaii’s law dates back to 2001 and states that hate crimes “means any criminal act in which the offender willfully selects a victim, or in the case of a property crime, the property that was the subject of a crime, out of hostility toward actual or perceived race, religion.” , disability, ethnicity, national origin, gender identity or expression, or sexual orientation of a person.”

The law provides reporting requirements as compiled by the Attorney General. Since the program began in 2002, a total of 48 hate crime incidents — 30 of them in the city and county of Honolulu — have been reported, for a statewide average of 2.5 incidents per year.

According to the 2001 data, the 48 cases made up a total of 56 biases “due to multiple biases”, expressed in some cases as follows: 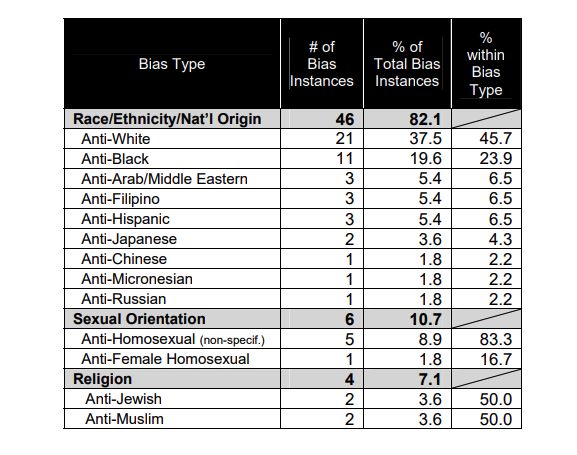 When I first wrote about hate groups in Hawaii in 2016, the Southern Poverty Law Center reported that Hawaii and Alaska were the only states without organized hate groups. But there were 842 nationwide.

Three years later, SPLC tagged five hate groups on our islands: one white nationalist, two black nationalists, and two categorized under “general hatred.” One such group was the Proud Boys, whose then-president was Nick Ochs, a UH journalism student who, in September of that year, agreed to a plea deal for his involvement in the Jan. 6 US Capitol riots.

Today, three years later, SPLC is tracking 733 hate groups in the US, including four in Hawaii: the Proud Boys, Great Millstone, Israel United In Christ and the Sure Foundation Baptist Church.

The first three groups are categorized as general hate groups, meaning they “peddle a combination of known hate and conspiracy theories, in addition to unique bigotry that is not easy to categorize.” Some of these groups “profit from their bigotry” by selling hate materials from the white supremacist movement.

As for this fourth group, the Sure Foundation Baptist Church is described by the SPLC as an anti-LGBTQ group in Kaneohe. For its part, the Sure Foundation Baptist Church’s Oahu website states that it is “an independent, fundamental, soul-winning, and family-integrated church, just for King James.” … We believe in hard preaching to keep the congregation from sin and to motivate/exhort them to please the Lord.”

A person who answered the phone number on the group’s Facebook page said I had the wrong number. I wanted to ask if the church is affiliated with Sure Foundation Baptist Church, which is led by Pastor Aaron Thompson of Vancouver, Washington.

Thompson was described by Metro Weekly as “insulting homosexuals in preaching the Bible” and “making homophobic statements and calling for the deaths of LGBTQ people.”

And SPLC reported in 2019 that Thompson was a speaker at a “Make America Straight Again” conference described as intended to “overcome stock fallacies and hateful rhetoric and urge the government to begin arresting and executing gays.”

When I submitted this story Tuesday afternoon, someone on the Sure Foundation Baptist Church Oahu Facebook page responded to my Messenger request, “This church is no longer operating.”

Sign up for our FREE morning newsletter and look better informed every day.